Finn Whale Piece - or what to do in January in the Hebrides when it stops raining!

Wildlife sound recording in January in the Hebrides is always a challenge.  A few weeks before I arrived on the island a Finn whale washed up on the shore of one of the most beautiful beaches in the Hebrides.

By the time I arrived this wonderful animal had been moved by the tides to the northern end of the beach, the end that is the most difficult to get to without disturbing the flocks of birds that were now feeding on the over 50 feet long decaying carcase.

My plan was to find a path through the machair and dunes at the back of the beach and get near enough to place my binaural head within the 50 metres of cable I had on the island. (This was not the first time I regretted not bringing at least 100 metres of cable!!).  This was done during a late evening with torrential rain, with the hope that my water proofing of the mics would survive till the weather calmed down tomorrow like the weather forecasters said it would.

I had managed to place the head within 20 feet of the whale covering the cable in the sand as I retreated back behind the dunes. Next day I carefully made my way to where the cable ended and sat there out of sight of the whale for 4 hours, the birds just did not feed, it was obvious that although the head was nearly buried in the sand they were not happy. I quickly removed everything and went back to a vantage point where I could see the carcase through binoculars and confirmed that the birds were back feeding.  They just did not like the head.

Plan B meant that I had to place the mics further away, which also meant that to get enough gain I had to resort to the parabolic reflector with a couple of Brady mics. This would give me a much tighter stereo image but the advantage I had was that I could position the camouflaged parabola behind a rocky outcrop approximately 100 feet away from the whale, the outcrop shielding the set up and lessening the sound of the sea roar. 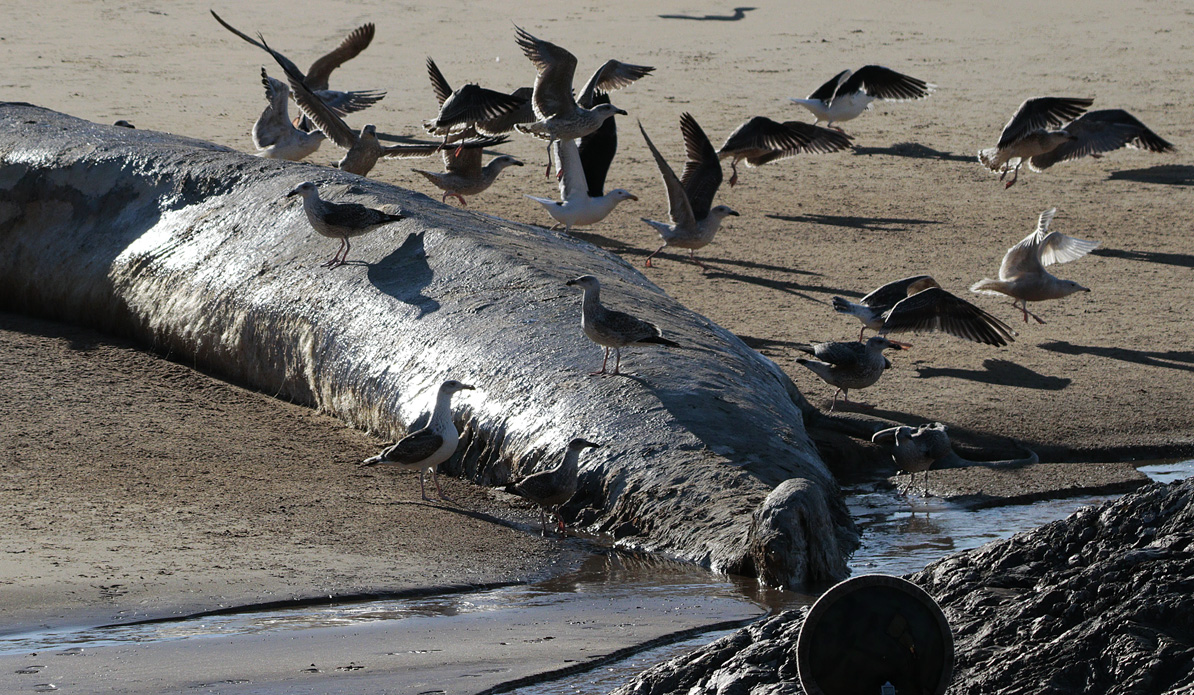 All this was positioned in near darkness, everything heavily weighted down to avoid been washed or blown away. I had studied the tide levels and was happy that all the kit was just above the high water mark. For the previous set up everything was to be cabled back to the Nagra LB, this time all I had to do is get to the kit, attach the Olympus LS11 to the parabola, plug in the mics and switch on the recorder hoping that my gain setting was ok.

Luckily the weather held for another day and the next morning I crept down in early morning dim and attached the recorder said a few words to say where I was and what I was doing and crept back to my viewing point up the hill.  In fact I was able to spend the whole day watching, I had put new batteries in the recorder along with a 64 Gig SD card.

Common, Herring, Greater and Lesser Black Back, Black headed, Glaucous and Iceland gulls visited along with Raven, Hooded Crow and Jackdaw. I was hoping for Golden Eagle, they flew over but did not stop for a snack, pity.