Why Binaural, because its the best way to record! Maybe.

HOW I BECAME TO BE SMITTEN WITH BINAURAL RECORDING

Back in the 1970's, before most of you reading this were born, and probably weren't even a twinkle in your fathers or mothers eye, some of us were venturing forth to capture the amazing sounds of nature as realistically as possible.

In those days the main object of our efforts was to record the vocabulary of as many different species of bird as we could, (any other creature making a sound was recorded if we came across them) – I still haven't managed to capture really good Badger activity, maybe this year!!

We were usually seen, following the guidance of RAM (Richard Margoschis), with a dynamic cardioid microphone, like an AKG D190, set in a parabolic reflector, an Atherstone one of course, connected to a cassette tape recorder, or for those with more money a reel to reel like a Uher or for the “very well to do” a Nagra or Stellavox. The thing is though, 95% of all wildlife sound recordists at that time were recording in mono, Species/Vocabulary recording does not really require any other technique.

Then, one Spring in the 1980's, 1983 to be exact, a young wildlife sound recordist came to one of my Ennerdale meetings with his home made plywood dummy head and introduced me to binaural recording.  My recording world changed, what I heard through my headphones was dynamic, all inclusive, all around.  Front, back, left,right, up and down, it was fantastic, I was hooked and still am. That young recordist (well young compared to me!) was none other than Chris Watson.

As with all forms of wildlife recording there are always some “downsides”. I had to buy another recorder, one that recorded in stereo and a microphone to match the MKH 105, still one of my favourite sounding microphones. I have to thank John G and Kyle T for helping me get on the omni road.  I had started using the 105 to get those “better” recordings. Money was always short and all non family purchases had to go through a difficult process!! It took nigh on two years, before I managed to get the Sony Professional Walkman and that microphone.

In the meantime I definitely had to “up my game” as far as fieldcraft was concerned, getting a single microphone close to a subject is one thing, getting a binaural head that close is another.  I'm talking about species recording of course, not just some simple habitat/soundscape recording. You can always resort to doing some of that type of recording when you fail to get the recording you want!

Family negotiations were eventually successful which was good, as by then,(after a good few trials), I had made my first head, “Fred”. He was born out of a old boat fender found washed up on an Hogh beach, on the Isle of Coll, just over the dunes from where I made my first Corncrake recording many years before. It has roughly the dimension of a human head, and it still sits proudly on top of one of my speakers in the studio, just waiting to be brought into action.  Always ready for anything is Fred. I still remember that first recording with Fred, it is still one of my favourite recordings.

As well as making “Fred” I used those two years to read up about binaural recording, finding out how different people/researcher went about reproducing what a human hears with his/her ears. To get the best effects, a dummy head of the correct consistency replicating bone and brain with the correct protrusions (ears and also nose) was the way to go. Fred did not match up to the perfect scientific calculations, but “he” worked pretty well and all those who have listened to the recordings made through headphones of course, seem satisfied and sometimes even impressed. 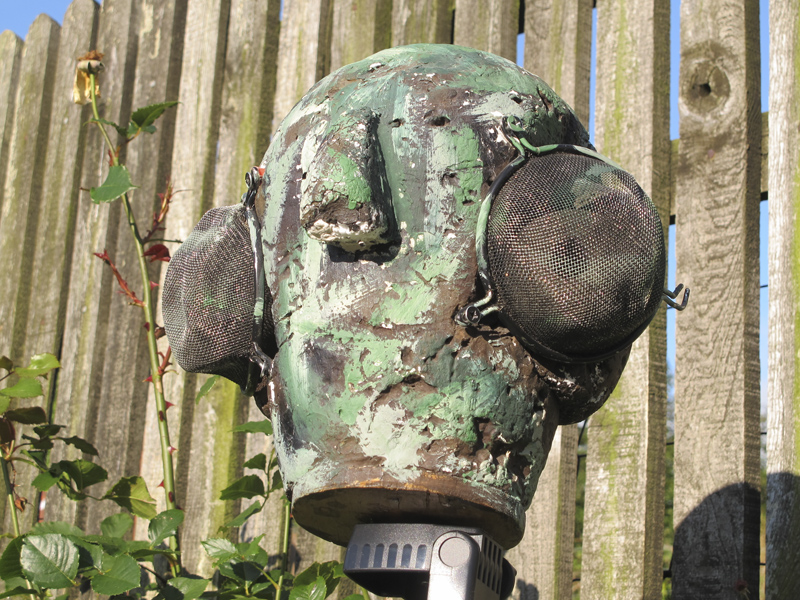 Fred was not perfect by a long chalk. The microphones were eventually positioned so they pointed forward not at right angles in conventional binaural set-ups.  These rely on the ears to focus the sound to the forward. After listening to my first recordings, I decided that nature needed a little help in that. After many experiments I found a microphone position that gave a good balance between front, side and back, up and down didn't seem to vary much whatever position I had the microphones as long as the microphone capsule position was not buried in the head. They had to be given “air to breath” as it were, and the denser finish to the inside of the ears made all the difference.

In the 1970's Jurg Jecklin of Swiss radio and latterly of the University for Music and Performing Arts in Vienna, designed the Jecklin disc to capture what he defined as the “Optimum Stereo Signal [OSS]”. He saw it as a refinement of the baffled microphone technique for stereo as initially described by Alan Blumlein in a 1931 patent on binaural sound. Much later in 1987, Michael Billingsley designed for Crown International the Stereo Ambient Sampling System, SASS for short, yet another version of a pseudo binaural set-up. Both of these approaches can create pleasing  and accurate recordings.

By the mid 1980's I had to create a further compromise system when I started to travel outside the UK, “Fred” was too bulky. A “Lightweight Fred” was born following the Jecklin approach.

“Lightweight Fred” fitted into the suitcase with ease and the good thing about it was that I could position the microphones at different angles to suit the different subjects I was trying to record. It's always good to have some sort of flexibility when recording in the wild, and I certainly went to some wild places.

BUT!  If you go too wide with your microphones you can create a hole in the middle of your recording.  Left and right without something in the middle does not sound at all good. The threat  of this “sound hole” is always there, and to overcome this and allow as spacial recording that I felt necessary, I decided I needed a third microphone and so my “trihead” was developed.

It's a kind of “Decca Tree” head. The “Decca Tree” was originally developed as a sort of stereo A-B recording method, adding a centre fill.  The technique was further developed in the early 1950's and first commercially used in 1954 by Arthur Hoddy et al and later refined by Kenneth Ernest Wilkinson and team at Decca records, hence its name.  Creating provision for this third microphone was not too difficult, I just drilled a hole in the centre of the baffle block. In this I could slide another microphone that was right in the middle between the other two.  With three omnis on board I can have the widest of images without losing the focus on the central subject or the total movement across the sound stage. 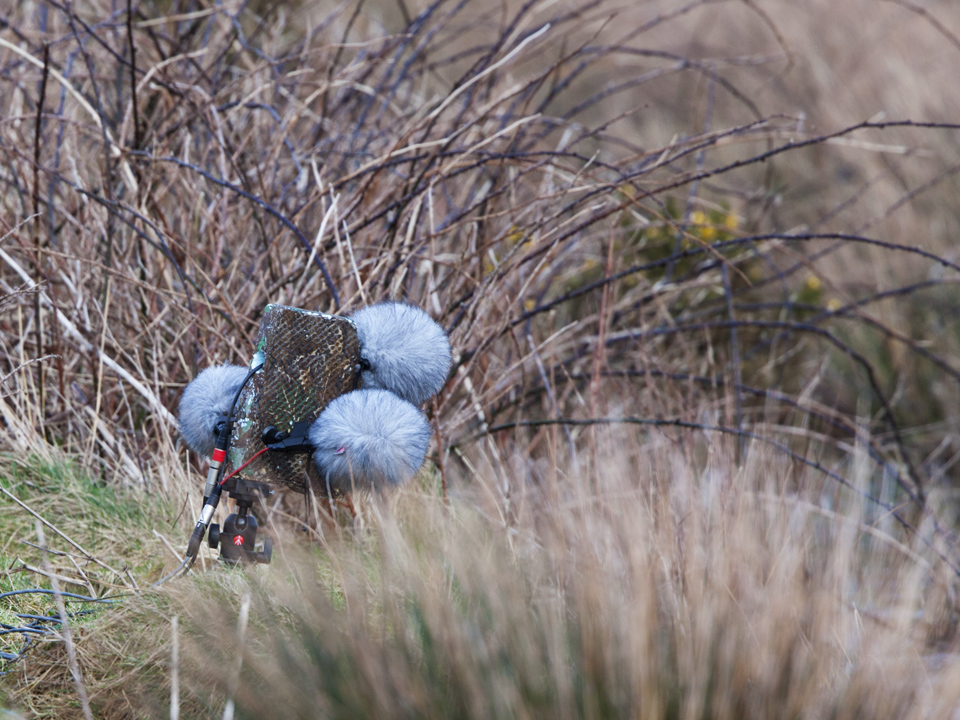 As I still use a stereo recorder as my main recorder, I feed the microphones through a mixer, my trusty SD 302 that I have now had for over 15 years usually does this job, or the Filmtech PAM 42 which I have had even longer!  Doing this, of course, means that I have to think on my “ears” in the field. This I find really exhilarating, much more fun than recording all the different tracks on my multi channel recorder and sorting it out in the studio.

I am always experimenting with different microphones in the centre position, they range from omni to hyper cardioid depending on the subject, and what I want the resulting sound picture to sound like. I also find that I can produce a better result for the normal home stereo system, some people still seem to accept sound is just either left or right, quite strange.

I've being using a “pseudo” binaural head now for over 30 years, it's become my way of recording. Obviously faced with a subject high in a rain forest, I would use a parabolic reflector with an omni mic (or two).  This gives me a highly focussed recording of the species. It would also be great to get a “trihead” recording as well, and if I could using that hyper cardioid in the centre, it would give me a chance of making an acceptable recording of the central subject, while still maintaining a width that would make a very acceptable and natural sound picture.

Lightweight “Fred” is now looking a bit battered, so I am in the process of creating a new one. (Haven't thought of a name yet). I will be following the Jecklin approach with a few modifications. A little larger and a bit more robust, but hopefully still giving me the ability to create what I enjoy hearing.